skip to main | skip to sidebar

1900 territorial senator candidate: Unconstitutional to annex Hawaii without a treaty 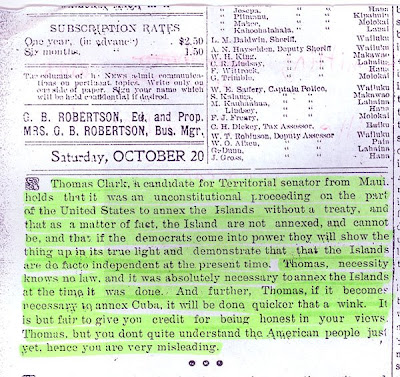 Keanu Sai just brought to my attention an interesting little tidbit regarding the purported 1898 annexation of Hawaii, a brief editorial published The Maui News on Saturday, October 20, 1900. Yes, 1900.

Thomas Clark, a candidate for the Territorial senator from Maui, holds that it was an unconstitutional proceeding on the part of the United States to annex the Islands without a treaty, and that as a matter of fact, the Island (sic) are not annexed, and cannot be, and that if the democrats come into power they will show the thing up in its true light and demonstrate that that (sic) the Islands are de facto independent at the present time. Thomas, necessity knows no law, and it was absolutely necessary to access the Islands at the time it was done. And further, Thomas, if it becomes necessary to annex Cuba, it will be done quicker than a wink. It is but fair to give you credit for being honest in your views, Thomas, but you don't quite understand the American people just yet, hence you are very misleading.

Ah yes, necessity knows no law. Sounds downright Bushian. Might makes right. Of course for those of us who actually value the constitution and the rule of law, "necessity knows no law" is a recipe for authoritarianism and antithetical to the values we were taught that America stands for, and stands because of.

But the main point here is that it is clear that it was publicly discussed and known at the time that the annexation had no constitutional basis without a treaty. This was later reflected in the 1988 U.S. Department of Justice opinion (under Reagan, btw) when it stated "It is therefore unclear which constitutional power Congress exercised when it acquired Hawaii by joint resolution." When the Justice Department goes to extensive explanation about the constitutionality of the annexation and ends up not being able to find what constitutional power was used, it is another way of saying there was none. What Mr. Clark was saying and what was publicly known back in 1900.
Posted by DPH No comments:

Who Do You Believe Re: The Ceded Lands Issue?

Watch a video regarding this issue here and you decide.

Click on the video screen to be transferred to YouTube to view the remaining five parts of this very informative video. E kākoʻo kākou iā Bumpy!
Posted by DPH No comments:

Just saw the DVD “The Ground Truth” on ‘Olelo TV this morning on a talk show about the current controversy surrounding Lt. Watada and his stand against the war in Iraq. The DVD documentary re-confirmed two things for me: 1. What happened here in Hawai‘i 114 years ago today is continuing today in Iraq by the U.S. government, and 2. Do NOT let your Hawaiian sons, daughters, nieces, nephews, cousins and friends join the military...it is not our war and is not worth dying for! Go to college instead...we have financial aid resources available to us! Do not be duped! This is a very powerful documentary. Please share it with friends and ‘ohana.

May Akua be with us all...
Posted by DPH No comments:

Considering the Hawaiian opposition to the Akaka Bill, do you still support the push for federal recognition?